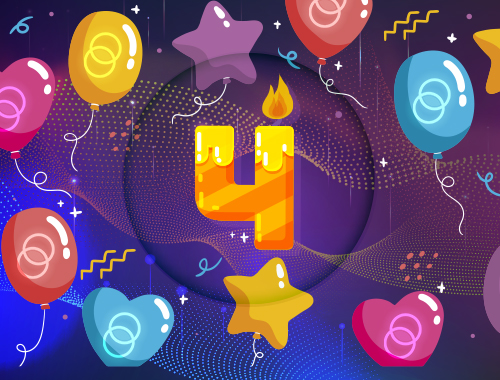 
Today marks the day our planet completes another orbit around the sun. Its fourth since Ixian was born. In this period, the Earth has traveled 2.34 billion miles and it is apparent that Ixian covered this distance with great success. The world is ever changing and these past four years proved to be a challenge as well as a blessing. Working on Ixian has turned out to be one of the most inspiring adventures, and certainly the most rewarding.

Despite everything that we have achieved in the first three years, it seems that during the past 12 months Ixian evolved more than ever before. In May 2019, we released a new version of Ixian DLT and reorganized our Github, so each project is neatly tucked in its own repository. We launched documentation pages, that provide a comprehensive overview and guides which make it easier for our community to use and learn about Ixian. At this point, we already released an easy to use Lite Wallet to accompany the launch of the first official Ixian Mining Pool in partnership with Kiramine. As expected, it brought many new enthusiasts to the project and Ixian got one of the first Youtube reviews published by Crypto Jitsu in June.

In months that followed, the network was steadily growing and the number of Ixian DLT nodes exceeded 100 for the first time. There were many advances in development, as we released Ixian DLT v0.6.5 and v0.6.6, which included the initial implementation of our custom designed consensus algorithm – Ixiac. Upgrades to the software also contained protocol updates to support S2 and Spixi, both of which would see the light of day shortly after. The increased number of miners helped in evaluating Ixian's mining algorithm, which we realized, needed tweaking in order to reduce the gap between CPU and GPU mining yield. Releases of Ixian S2 and Spixi were big milestones as it was the first time we could display the use case which we have envisioned. To celebrate, we launched the Spixi website, which now provides all relevant information on our flagship app.

In August 2019, cryptocurrency exchange Txbit listed IxiCash and another youtuber Crypto Fish published his mining guide for Ixian. List of milestones continued in September when we released Spixi v0.3.0, which brought support for bots and file transfer within the app. We started extensive beta tests with the help of our community. February 2020 marked another big month for Ixian as IxiCash was listed on ViteX exchange and the most recent Ixian DLT update v0.6.7 was released, which included a comprehensive list of changes, most notably TIV/PIT (our version of Simplified Payment Verification - SPV), WSJ (for faster wallet state processing) and cuckoo filter (an alternative to the bloom filter).

Looking back, the task list seemed to be never ending, the development, testing, reevaluating became an everyday routine for us and our community. Ixian itself has evolved over time and it is now a step closer to the vision that started it all. Ixian blockchain has proved to be resilient and reached a block height of 1,000,000 blocks after over a year of operation. Its unique features distinguish it from the industry. The launch of Spixi on Google Play Store and final preparations for iOS support are giving us all a glimpse of what Ixian will become in the near future.

Today we will celebrate and enjoy this moment in time and because we want Ixian’s 5th year to be the best one yet, we will keep on pushing.

Thank you for being part of the Ixian adventure and stay healthy,
Team Ixian