How to setup Ixian DLT on Windows OS?

Users must have the ability to forward ports on their routers or connect the nodes directly to the internet.

Default port used by Ixian DLT is TCP 10234 and can be changed using the -p command line switch.

A minimum of 2000 IXIs is required to operate the Ixian DLT master node.

Step 1: Download the Ixian DLT archive or compile the binary from source (see below).

Step 2: Unpack the archive and start the node by double-clicking the IxianDLT executable or by issuing the command “IxianDLT.exe” from the console window. The output should be similar to the following: 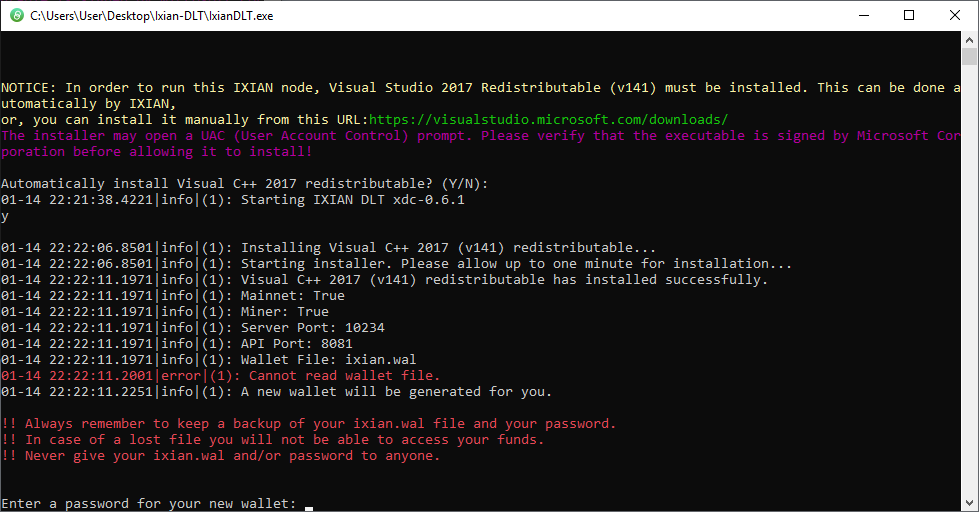 Step 2*: When starting Ixian DLT software on Windows 10 operating systems for the first time, a Windows Defender SmartScreen might pop up that looks like the image below. You have to click on "More info" and then "Run anyway" to proceed. 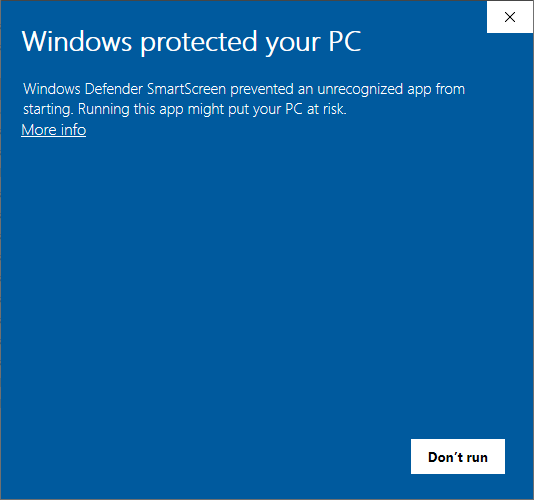 Step 3: If this is the first time that you're starting Ixian DLT, a new wallet will be generated for you. You have to set your new wallet's password to proceed. This password will be used to encrypt the ixian.wal wallet file and will be required every time you start the Ixian DLT node.

Step 4: If this is the first time that you're starting Ixian DLT, a firewall window may pop-up (as seen on the image below). Select private and public networks and click "Allow access". 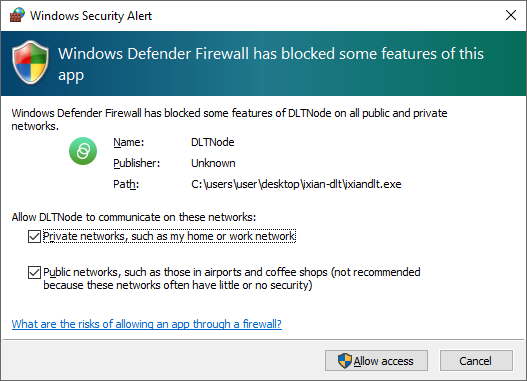 Step 5: The DLT node is now operating. In order to interact with your node, open a web browser and connect to http://localhost:8081. This interface is only available from the same computer where Ixian DLT is running. 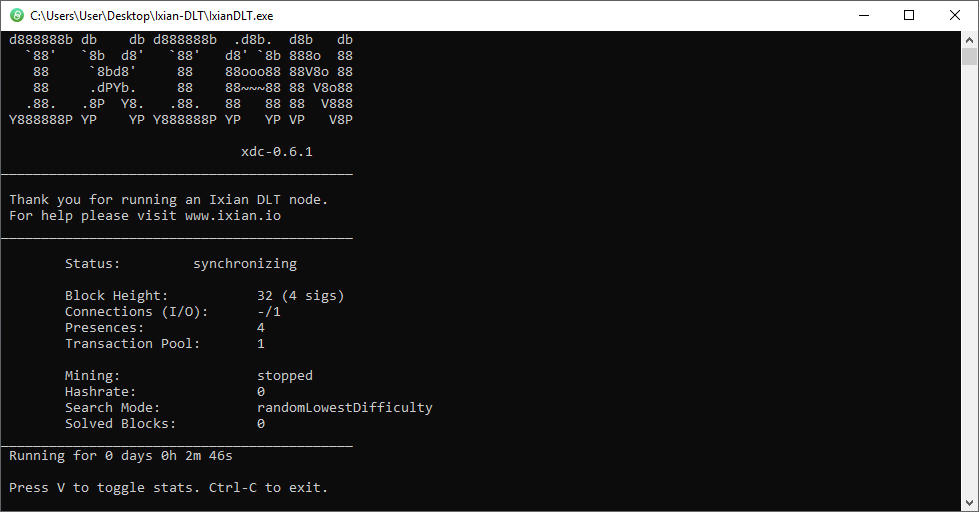 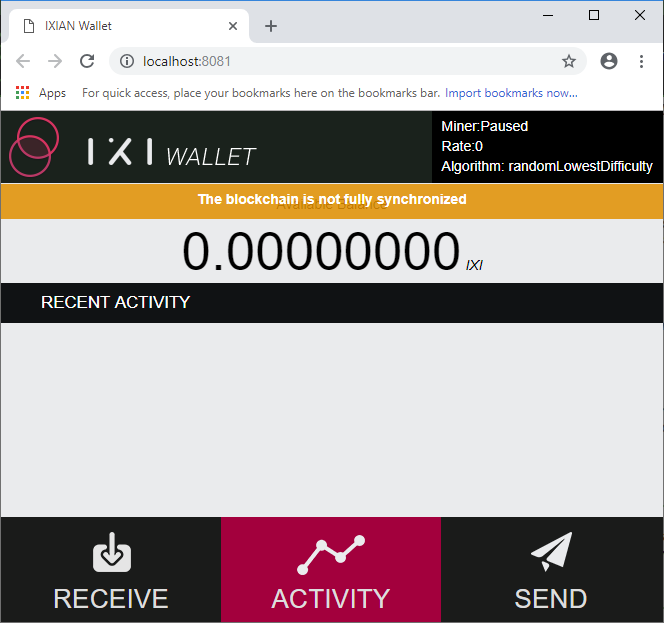 How to upgrade Ixian DLT to a newer version?

Before proceeding make sure to copy your ixian.wal wallet file somewhere safe. To upgrade, simply download the archive of the new version, unpack the archive and overwrite the old files with the new ones.

How to run Ixian DLT on test network?

Do the same steps 1 to 5 from How to setup Ixian DLT on Windows OS, except in step 2 make sure to run the executable using -t command line parameter or by simply running testnet.bat script. Testnet works on TCP port 11234 and for API 8181 by default. Don't forget to forward TCP port 11234 if you don't have a uPNP compatible router.

Create your account on https://www.ixian.io and register your Ixian address in "My testnet addresses" section of your dashboard to receive 25000 testnet IXIs. Note that it can take up to 15 minutes for IXIs to be distributed to your address.

How to build Ixian DLT from source on Windows?

Step 1: Clone the project from GitHub, or download it as a ZIP.
Step 2: Open the solution file DLT\DLTNode.sln with Visual Studio 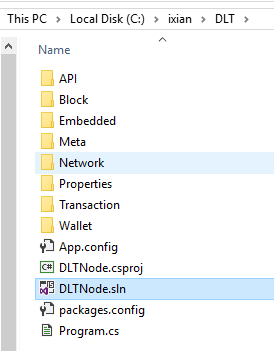 Step 3: In the solution explorer, right-click the project “DLTNode” and choose “Rebuild”

Step 4: (Optional) If the Output Window is not enabled, click on View -> Output to see the results of the rebuild. 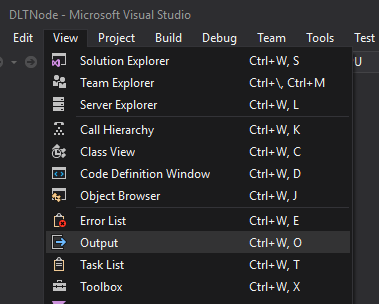 Step 5: The rebuild should finish with the status “Rebuild All: 1 succeeded”. Some warnings are expected, especially in third-party code, but if you encounter errors at this point, please open an issue on the GitHub page and attach the contents of the output window as a text file, so we can find out what went wrong!

Step 6: The DLT program can be found in the bin\Debug subfolder. It will be named “IxianDLT.exe”

Step 7: (Optional) You can copy the binaries to any folder on your system, but make sure to include all files which were generated in the bin\Debug folder. Alternatively, you can start the node from the Debug folder.

How to build Ixian DLT from source on Linux?

Download and install the latest Mono release for your Linux distribution. The default Mono versions shipped with most common distributions are outdated.

Go to the Mono official website and follow the steps for your Linux distribution. We recommend you install the mono-complete package.

Now open a terminal. For Debian based distributions such as Ubuntu, type

or if you have a Redhat based distribution, type

Next you'll need to build the Ixian solution. You can do this by typing the following commands in the terminal:

The IxianDLT will be compiled and placed in the IxianDLT/bin/Release/ folder.

For the IxianDLT node to work correctly, you'll need to copy the libargon2.so shared library to the IxianDLT/bin/Release/ folder. You can use the library provided in the latest Ixian Binary release.

If you want to build the libargon2 shared library yourself, you can do this by typing the following commands in the terminal:

Adjust the directory as neccessary, if you compiled the argon library in a different location. Please note that the library name generated by the argon project is libargon2.so.1, but Ixian requires libargon2.so. The file can be safely renamed, as shown in the command above.