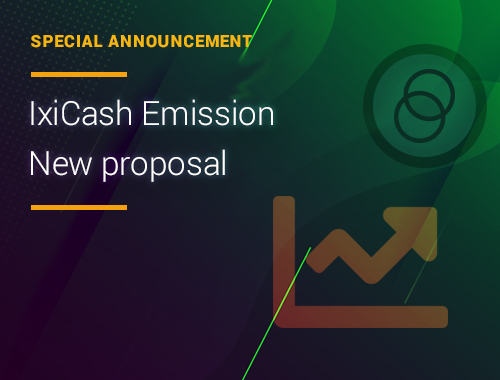 
From the beginning we wanted Ixian to be different, the planned emission/distribution was unusual by industry standards. Our initial plans included an uncapped total supply of IxiCash and an increasing mining and signing rewards over a certain period of time. This model received much criticism and there was a lot of discussion regarding it.

As you might have noticed already, Ixian DLT is a relatively young chain. It’s now been running for 2 years. As such it is fairly expected that most of the IxiCash remains to be distributed.

It is fair to say that we provided reasoning behind the planned emission but failed to receive an actual constructive proposal for its change. Despite that, we understood that this issue needs to be addressed and a different model needs to be put in place before we finalize the protocol and set it in stone for all time.

We researched this subject in great detail and discussed different ways to address the issue. Because we had a really packed development roadmap that we had to keep up with, it did take a considerable amount of time before we prepared all the details that we are about to present to you.

In regard to this, we have prepared a proposal for the new emission model that will replace the existing model. This new model significantly decreases the size of mining and signing rewards and should be activated around block height #1702000 with block v8.

You can now view the IxiCash Emissions on the Ixian Block Explorer. Our new proposal includes a target supply of IxiCash at 21,000,000,000 (21 BN IXI) after 100 years.
You can immediately notice the following differences from the previous model:

- Our new proposal includes a target total supply of IxiCash at 21,000,000,000 (21 BN IXI) after roughly 100 years of operation, compared to the current model which has a target supply of 115,000,000,000 (115 BN).
- The block rewards are decreasing instead of increasing. This will have a significant impact on the amount of newly minted IXIs.
- Mining period will not end after 5 years, but will rather carry on until 21BN IXI are distributed (roughly 100 years from now).
- There will be mining block reward reduction at block 1.8M and after that the block reward halves every 3 M blocks (roughly 3 years) until block height 15M, after which the block reward remains constant until the end of the distribution period.

All this can be seen on the charts that are visible on our emissions page. The new model is planned to take effect at block height 1.8M along with the “Block V8” update.
Once this emission model is implemented it will be set in stone, there will be no possibility to change or alter any aspects of it. So this change is a once in a lifetime event!

We would like to discuss this model in greater detail with all of you, so we invite you to join our discussion on our Discord server, in the #emission-discussion channel.

It is also at this time that we would like to announce that Ixian is nearing its completion as a platform and the underlying protocol is about to be set in stone. We are confident about our goals of creating a platform that can actually scale in real life. This means that Ixian DLT will have an effective throughput of thousands or even tens of thousands of transactions per second on the mainnet.

Our next step is lifting the cap to 20,000 transactions per block, and considering our block time of 30 seconds, it effectively translates to 666TPS.

We are looking forward to discussing this with all of you!